So grateful for these wise & compassionate words & thoughts from my long-ago (and also still today) poetry teacher and friend Grace Bauer.

via Teaching Poetry in a Time of Pandemic

Last class we started a conversation about the genre of poetry – what it is, what it isn’t, what our experiences have told/taught us about what makes a poem a poem, or what makes a not-poem not a poem. After generating our own thoughts, we looked at a set of poems and observed how those poems were, by their existence, their formal choices, their shapes and sounds and subject matter, suggesting what a poem does/can do, what a poem is/might be.

The homework was to write a poem and an accompanying author’s note discussing how the poem draft is (trying to be?) a poem, as opposed to a not-poem, what choices or techniques or ideas are at play in the making of a poem or poem-like thing. Students have swapped and are making descriptive comments now about these questions of poem-ness, along with describing the use of concrete, sensory detail. They were even numbered, so I commented on my own draft.

The second assignment in Creative Writing (aside from an in-class freewrite) invites students to practice using concrete imagery — language of the five senses — as well as imaginative associations / associative play to bring an “abstraction” to life. We discuss “showing” and “telling” — NOT merely how you’re supposed to do one and not the other; rather, how the two are different and have different uses/purposes. This exercise and assignment, though, is definitely about using SHOWING. (For a really important perspective/critique on some not-great implications/limitations of a rigidity that privileges “showing” over “telling,” see THIS amazing piece.

This is another “worksheet” brainstorming activity — it doesn’t have to be a worksheet of course, but I’ve found it handy at times. After a conversation and some terms-defining around imagery, figurative language, “connotation” and “denotation,” the function of the five senses, and the concept of the “abstraction,” we each choose one abstraction to take through the exercise.

We spend a little time in class sharing some of the associations/ideas/images we came up with — privileging the strange and surprising ones. The take-home assignment is to create a piece (any genre, any length), preferably titled with the selected abstraction, which creatively uses concrete/sensory detail (imagery) to bring that abstraction to life. I share some samples with students — I’ll admit nearly all of the samples are poems. I need to work on getting more genre variety in there. Here’s my notebook draft, then my typed-up edit with author’s note.

I am reminded every time I use this exercise of a shy and quiet high school student in a summer poetry workshop I taught years ago. He almost never spoke. When the workshop was doing a version of this exercise as a group that summer, we were coming up together with associations for the abstraction, “love.” We had decided that love drives a vintage baby blue VW bug convertible. We were speculating, I think, about where love would drive — and this young man spoke up quietly. I didn’t hear him at first, and asked him, gently, if he could repeat himself. “Love doesn’t have a driver’s license,” he said, dazzling us into appreciative, companionable silence. Everybody in the room that day agreed that love definitely didn’t have a driver’s license. I have never forgotten that!

I’m so happy to have been invited to read by the folks at the Central NH Writer’s Circle! There will be open-mic signups starting around 7PM, along with “cocktail half-hour,” and then I’ll do my reading at 8PM. After a short break, the open-mic will start at 9, and music from Hometown Eulogy will start around 9:45.

Here’s a link to the Facebook Event page with more details!

It is my habit to start each semester’s (UG sophomore-level) Creative Writing class with a writing exercise/assignment using objects — some common, some strange — distributed at random among students. There’s a multi-step, in-class generative phase, and then at home, students are to draft a piece somehow connected to/inspired by the object. Here are some photos documenting my own brainstorming and drafting — my object was a “T” token.

Step one — the in-class brainstorming part. I keep veering back and forth between just “talking” students through the steps and giving them a handout, which is good for encouraging students to move at their own pace.

I took my “worksheet” home and pounded out this really long, probably needlessly-wordy poem draft (essay draft?). Then, next class, we did a round of feedback, with multiple folks commenting on drafts. My readers were really helpful, and good at describing to me what they noticed and appreciated. And this is only the second day of class!

I’ve already started very minimally tinkering/editing…I’ll probably revisit this draft when we spend a class focusing on “radical” editing and revision skills. We’ll do exercises meant to really “mess up” our drafts, in order to “see them anew.” Until then, I might keep tinkering here and there:

This poem was originally published in 2013 in OVS magazine — there are plans to change (any day now!) all the locks in my campus building, sweet old Ellen Reed House, and talk of those plans brought this poem back to mind.

On The Locksmith’s Retirement

After nearly forty years,
on the small-town college campus
he reckons eight hundred and forty two doors
were his exclusive territory –
his, and his father’s before him –

not just the locks, but the doors
themselves, the hinges,
the winter-swollen wood
needing a bit of shouldering,
the brass strikeplate
that’s shifted over time
so the deadbolt’s tongue
can’t quite find home.

These buildings known to him
like the body of the beloved –
an intimate cartography – all these portals
which seem generic to the rest of us.

The reception’s assembled crowd laughs
to hear he’s picked a few locks in his day,
but he doesn’t find it that funny –
just another kind of key he’s made,
another way through
to the other side.

Back in my office,
behind what I now know as his door,
my freshly-pinned ten years
feel scant; my scholarship thins
to shallow ephemera. My sense
of where I am, what I know, disrupted.

When I retire, I hope I’ll also be able to say
I’ve opened every door at least once.

This week in the Poetry Workshop, it’s reading and writing list poems.  As you can see, my students did a stellar job of coming up with a huge variety of types of list — so many more than I had thought up on my own.

I wonder about the list as a structure and a form. A list is certainly a kind of repetition, in the way that rhyme is a repetition, or refrain. As a form a list may set up a clear/particular premise or expectation. Included under the umbrella of “list poem” for me are the techniques of anaphora and epistrophe. One student introduced us to a third — epanalepsis.

It seems to me that writing and reading list poems (or “litanies”) brings to the fore particular poetic concerns, at least for me. List poems make me think more about order and arrangement — does a list escalate? Fork out into tangents? How might juxtaposition of dissimilar items work as a kind of energy in a list poem?

If the list is numbered, what do the numbers bring to the table? When to number, when not?

Also: how do you find a way to END a list poem?

Also: what happens to syntax (verbs, especially) with a list? Some kinds of lists are very noun-y.

POEM PACKET of examples we read in class:

Christopher Smartt: from Jubilate Agno
Stephanie Lenox, “Rejoice in the Petty Thievery of Office Supplies”
Joy Harjo, “She Had Some Horses”
danez smith, “alternate names for black boys”
Savannah Sipple, “A List of Times I Thought I Was Gay”
“4 Ways of Throwing Something into the Boston Public Gardens Swan Pond,” “the bullshit,” and “non-hierarchial list of love poem ideas,” all by jamie mortara
“Things I Have Failed At” by Baruch Porras-Hernandez
“Things That Appear Ugly Or Troubling But Upon Closer Inspection Are Beautiful” by Gretchen Legler

In different days, those two lists I just wrote — a list of things I’m thinking about with list poems and a list of list poems — would perhaps be combined and expanded into more of a little essay. Alas, these days are filled with so many other lists, which even now are glowering at me as I take time away from to share even these scantest, barely-conceived thoughts.

I’ll end with a VERY OLD list poem I wrote when I was living in Lincoln, Nebraska. It took me a while to remember I had written such a poem — but — here it is.

The drunk one who stumbles
up onto your porch
to triangulate his walkie-talkie.

The ones who are beautiful.

The muzzled dog that barks
anyway, each time you park
or open your door or sneeze loudly.

The ones who listen.

The kid, the one who steals
lawn ornaments you never liked anyhow.

The shady one, or the one
with shady friends.

The one whose window is always blue
and flickering with TV light.

The ones whose windows
are never open.

The ones who play guitar.

The ones who go to church
in the windowless white building
on the corner.

The one who hates you.

The ones who have
two testy Siamese cats.

The mean one.
The scary ones.

The one who dreamt
last night of you
but who will never say.

The one you dreamt about.

Those who smoke summer evenings
on porches facing yours.

The ones you wonder about.

The ones who know your name
and the ones who don’t,
who have barbecues.

The ones who wonder about you.

This work is licensed under a Creative Commons Attribution-NonCommercial-NoDerivatives 4.0 International License. 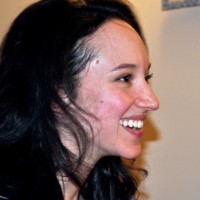 Scribblings in awe of poetry, transitions, mutations and death

An Introduction to the English major at PSU

Poems using the 7 words forbidden in Centers for Disease Control and Prevention documents for 2018 - Sarah Freligh and Amy Lemmon, editors

A publication of the Poetry Society of New Hampshire

Exploring the world, one voice at a time.

Literature with a delicate perfection

Out in Print: Queer Book Reviews

Liz Ahl
Create a free website or blog at WordPress.com.